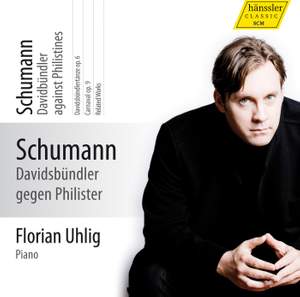 Uhlig, now well into his complete Schumann cycle, is a musician to his fingertips, with a sense of style and an affinity for the piano so natural that one forgets all about technique. Melodically,... — BBC Music Magazine, November 2015 More…

With the 8th installment of the first true integral recording of Schumann's works for solo piano, Florian Uhlig reaches the midway point of his widely acclaimed and much admired project. That Schumann deserve such a presentation, is undisputed, and by organizing each installment by musical themes, allows for both a more accessible and representative immersion into the world of the composer’s thoughts and feelings.

This new CD deals with the dual nature of the composer and writer: It finds its finest expression in the "Davidsbündlertänze" (1st version, Op. 6), in the idea of Davidsbündler in which different views on art mint in the figures Florestan and Eusebius which are also liable for the individual pieces of this cycle. The typical romantic play of rubrics, musical ciphers and pseudonyms can also be found in the "Carnaval" Op. 9 – a work which Schumann himself felt was too difficult to be performed and understood.

Together with these two great piano cycles, Florian Uhlig has collected some related miniatures that either Schumann composed and later rejected, or for one reason or another was never included in subsequent printed editions. Among these are at least three premiere recordings. That Florian Uhlig convincingly masters these emotionally complex works in both technical and expressive terms requires no further mention. Once again, he has assembled a CD program that clearly sets itself apart from other typical recitals.

Uhlig, now well into his complete Schumann cycle, is a musician to his fingertips, with a sense of style and an affinity for the piano so natural that one forgets all about technique. Melodically, he could tell many singers a thing or two about inflection, and his buoyant rhythmic profiles and clarity of phrasing are blessedly free from the tyranny of meter…the seldom heard miscellaneous pieces, by contrast, are quite outstandingly well done