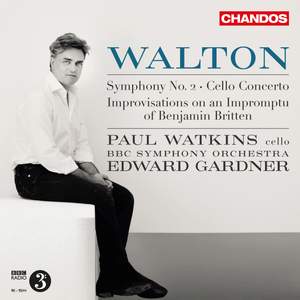 If a new Walton release can finally put paid to the notion that his music somehow 'went off' after his move to the Italian island of Ischia in 1956, then this must be it. And the performances... — BBC Music Magazine, April 2015, 5 out of 5 stars More…

Walton: Improvisations on an Impromptu of Benjamin Britten

Edward Gardner conducts the BBC Symphony Orchestra in late music by Walton. It follows the success of his recording of Walton’s Symphony No. 1 and Violin Concerto – one of Chandos’ best-selling recordings for 2014. With an air of relaxation that differs from the tension of his previously recorded early works, the music on this album is likely to cause as much excitement.

Walton’s Second (and last) Symphony was commissioned for the 750th anniversary, in 1957 – 58, of the founding of the city of Liverpool, but, delayed by the composition of the Cello Concerto, it was only premiered in 1960. Scored for a large and colourful orchestra, it is based on the same model as the Third Symphony of Albert Roussel, with a similarly compact duration and the use of the key of G minor, and a concentration on angular melodies, sharply dissonant harmonies, and motoric rhythms.

The Cello Concerto was premiered in London in 1957 by the BBC Symphony Orchestra itself. The cello soloist is Paul Watkins, exclusive on Chandos, highly praised as a member of the Emerson String Quartet, but also the Artistic Director, since last year, of the Great Lakes Chamber Music Festival of Detroit. In this piece, the traditional structure of Walton’s earlier concertos – a moderately paced opening movement followed by a central scherzo – ends in a rich finale consisting of a theme and four ‘improvisations’. The concept of ‘improvisation’ occurs again in the last work on the disc, based on the ‘Impromptu’ of Benjamin Britten’s Piano Concerto.

If a new Walton release can finally put paid to the notion that his music somehow 'went off' after his move to the Italian island of Ischia in 1956, then this must be it. And the performances of these late-ish works are on a level that have you wishing that the composer had lived to hear them.

The Symphony No. 2 gets a performance of élan from Edward Gardner and the BBC Symphony Orchestra.

Edward Gardner directs a superbly perceptive account of Walton's Second Symphony, exhilarating in its purposeful thrust…make no mistake: with cracking playing from the BBC SO, Gardner's is a conspicuously insightful reading of this underrated score…a gem of a disc.

[These issues] are on balance the greatest recorded performances of these three demonstrable masterpieces it has been my pleasure to hear…there is nothing egotistical in these splendid interpretations, and the result is a set of consistently satisfying performances of the highest musical grasp and understanding. I cannot imagine anything finer than these.

from [Watkins's] very first entry it’s clear that his is going to be a thoughtful interpretation, full of beautiful tone in the introspective first movement, but also impressively virtuosic in the second...in Gardner’s hands [The Second] comes across as a completely convincing symphonic statement. The playing is unfailingly committed and colourful, with a sensationally scintillating account of the slow movement being a particular highlight for me.

Lavishly reproduced in surround sound, these accounts of three of Walton’s later, comparatively neglected works are as superbly thought out as they are atmospherically recorded...The heartwarming Cello Concerto finds a masterly exponent in Watkins.