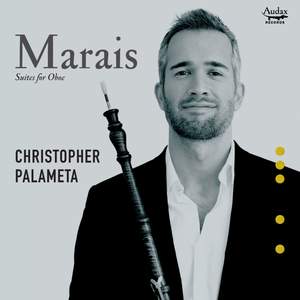 Known as an ardent defender of unexplored repertoire for the oboe, Christopher Palameta sheds light on the neglected – but not forgotten – “phantom” literature for oboe by Marin Marais. Six suites are presented in this world- premiere recording, Palameta’s 4t h solo CD and his first appearance on Audax Records. Intimately familiar with the French style, Palameta was awarded research grants in 2003 and 2006 by the Canadian government to re- establish these works into the oboist’s repertoire; this recording is the fruit of that research.

Born in Montreal, Christopher Palameta is one of the most celebrated baroque oboists of his generation. After being appointed oboist in the Tafelmusik Baroque Orchestra of which he was a core member for four years, he currently devotes himself to chamber music primarily, and has recently released three world-premiere recordings of the neglected chamber works of Johann Gottlieb Janitsch for the Canadian label ATMA Classique, all of which have garnered unanimous praise from the international press. With one foot on either side of the Atlantic, he currently resides in Paris and plays with many of Europe’s and North America’s prominent period ensembles.