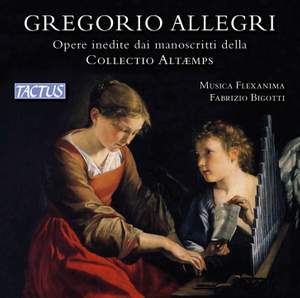 Allegri: Unpublished works from the manuscripts of the Collectio Altaemps

Pierre Bonhomme: In lectulo meo a 8

Although the output of Gregorio Allegri was not large, it covered almost every musical genre of the time, from strict polyphony to monody, instrumental music and the cantata.

He is now remembered principally as the composer of the nine-voice Miserere, written around 1638 for the Holy Week celebrations and made famous in the nineteenth century version which requires a high C in the coro favorito.

Five years of bibliographic and musical research in Italy and abroad have permitted the rediscovery of the well-rounded personality that his contemporaries recognized in Allegri, and, from this point of view, quite apart from a world premiere recording of exceptional importance, the pieces contained in the Altemps manuscripts undoubtedly constitute a new chapter to add to the history of sacred music.