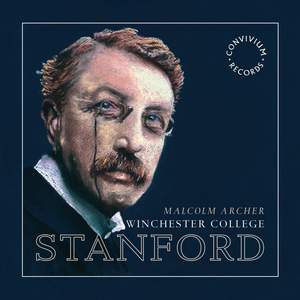 Stanford: O for a Closer Walk with God

Stanford: When, in Our Music, God Is Glorified

Stanford: If Ye Then Be Risen

Stanford: The Lord is my shepherd

Convivium Records proudly present the sacred choral music of Charles Villiers Stanford, recorded by Winchester College Chapel Choir, with the new Dobson organ in Merton College Chapel, Oxford. This delightful collection includes some of Stanford’s best-known choral music alongside a number of works that are rarely performed and recorded.

Generously supported by the Stanford Society, the booklet programme notes have been compiled by Professor Jeremy Dibble, a leading authority on the composer’s music. The booklet cover portrait was specially commissioned for this release. Also included in the booklet are a number of images of Stanford’s manuscripts, kindly reproduced with permission from the Royal School of Church Music.

Winchester College Quiristers (trebles) have for over 625 years sung services in Winchester College Chapel. In modern times they have formed a choir (Winchester College Chapel Choir) renowned for its excellence, under the masterful direction of Malcolm Archer. In addition to singing four services each week in the College Chapel, the Quiristers regularly broadcast and record. In recent years the Chapel Choir has sung in the USA, Canada, Germany, the Czech Republic, Hong Kong, Italy, France, Holland and Russia. They perform a fascinating mix of both sacred and secular repertoire and regularly sing in London, where performances have included the BBC Promenade Concerts. They also frequently appear on TV and Radio. On three occasions since the Millennium, Quiristers have won the title of BBC Young Chorister of the Year, by any standards an outstanding record.