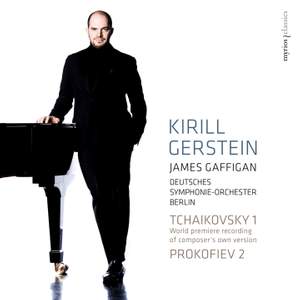 Perhaps the most striking aspect of Gerstein's interpretation is his ability to make the piano writing sound much lighter and more transparent than usual...Instead of the conventional barnstorming... — BBC Music Magazine, March 2015, 5 out of 5 stars More…

Ahead of his Proms performance of the First Piano Concerto tomorrow, the pianist talks to David about the various versions of the work.

Recording of the Week,  Russian Cello and Piano Concertos from Steven Isserlis and Kirill Gerstein

David listens to a pair of new releases that throw light on early versions of concertos by Tchaikovsky and Prokofiev.

Kirill Gerstein’s first orchestral recording marks the world première recording of the 1879 version of Tchaikovsky’s first Piano Concerto. Based on Tchaikovsky’s own conducting score from his last public concert, the new critical Urtext edition will be published in 2015 by the Tchaikovsky Museum in Klin, tying in with Tchaikovsky’s 175th anniversary and marking 140 years since the concerto’s world première in Boston, in 1875. For the recording, with the Deutsches Symphonie-Orchester Berlin conducted by James Gaffigan, Kirill was granted special pre-publication access to the new Urtext edition.

Despite negative criticism from pianist Nikolai Rubinstein, Tchaikovsky had the first version of the concerto published in 1875. The second version, which has been recorded here, incorporated small practical adjustments to the piano part made by Tchaikovsky. It was published in 1879 and used by him in subsequent performances including in 1893 at the last concert he conducted when he paired the Piano Concerto with the world première of his Pathétique Symphony. Tchaikovsky died within days of the performance, and the third version of the Concerto was published a year after his death. According to Kirill it “contains a number of editorial changes that differ from the text of Tchaikovsky’s own score, were not authorized by him and made posthumously.” For this world première recording, Tchaikovsky’s first Piano Concerto is paired with Prokofiev’s Piano Concerto No. 2. The chequered history of the second Piano Concerto also resulted in a second version. As Kirill explains, “composed in 1913, Prokofiev left the original manuscript of the second Concerto in Russia and during one of the cold winters during the tumultuous period of the Russian revolution the score was used by his neighbours for heating the stove. He reconstructed and revised the composition premièring the second version of the concerto in Paris in 1924.”

Perhaps the most striking aspect of Gerstein's interpretation is his ability to make the piano writing sound much lighter and more transparent than usual...Instead of the conventional barnstorming bravura, Gerstein brings poetry, balletic grace and an infinitely wide range of timbres. Yet in no sense does the performance seem understated.

In his hands (and with sensitive accompaniment from the Deutsches Symphonie-Orchester Berlin under James Gaffigan), the overall feel of the work is changed from a heroic, red-blooded Romanticism, seeming to prefigure turbulent Rachmaninov, to a more introspective vision.

Even if you do not immediately spot the difference...this is a performance of such refinement, strength and commitment that you stop worrying...This is the kind of serious, intelligent and virtuosic music-making that keeps classical music alive.

The textures [in the Tchaikovsky] are lighter and sprinkled with arpeggios...Pomp has gone; the mood is poetic, as though we had dipped into Schumann’s piano concerto by mistake...Pianist and orchestra pounce on the [Prokofiev's] pungent rhythms like hungry lions and stir burning energy and rage. This is Gerstein’s first concerto album and it’s definitely one you notice.

a performance of stunning power and control.

This [Tchaikovsky] concerto can be a bit of a slog, but never so here…James Gaffigan gets superb support from the Deutsches Symphonie-Orchester Berlin, and keeps things moving in the closing minutes…Gerstein's fearless stamina gets him through the [Prokofiev's] vast cadenza with unerring ease, and he's alert to the music's pain and dislocation...All superbly recorded and well annotated.