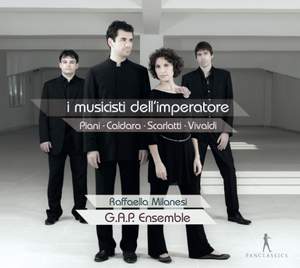 Music from the reign of Charles VI of Austria

An Italian violin virtuoso of the 18th century, Giovanni Antonio Piani, is the inspiration behind the group bearing his initials, the G.A.P. Ensemble founded in 2012. Its three members - Emilio Percan (violin), Oriol Aymat Fusté (violoncello) und Luca Quintavalle (harpsichord) – are united in their shared interest in the works of this composer who is almost unknown today.

The Habsburgs were amongst the most important music patrons from the 15th century onwards, engaging the best musicians of the period at their courts. The programme of this recording presents composers who were connected to the Habsburgs and Emperor Charles VI in the most varied ways. For example, there are Giovanni Antonio Piani, the best-paid musician of the Imperial Court Orchestra, and Antonio Caldara, Charles VI’s favourite composer – both of whom lived and worked in Vienna. Music directors in the service of the Habsburgs in other locations were Alessandro Scarlatti and Antonio Vivaldi, in Naples and Mantua respectively.