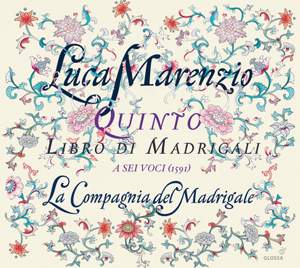 the singers infuse their accounts with the true spirit of chamber music and, as native Italian speakers, are highly responsive to the drama and nuances of the texts...offering ardent and expressive... — BBC Music Magazine, Awards Issue 2015, 5 out of 5 stars More…

La Compagnia del Madrigale’s subtle, yet powerful advocacy of great Italian madrigals continues with Marenzio's 'Quinto Libro di Madrigali a sei voci' from 1591. Their previous recordings including the recent award-winning 'Primo Libro', have demonstrated their fresh approach, imbued with invaluable years of experience in other groups such as La Venexiana and Concerto Italiano. From 2016 La Compagnia have been invited to join the concert season at Wigmore Hall. Marenzio’s 'Quinto Libro' was dedicated to Virginio Orsini, Duke of Bracciano, on the occasion of his marriage to Flavia Peretti: a wedding album full of the latest musical and poetical techniques. The "Canzon de’ baci", with words by Guarini, for example, is a marvel of its kind. However, below the surface polish of elegant and stylised Late Renaissance vocal music lurks a dramatic tale, conjured up by Marco Bizzarini in his booklet essay; of crimes of honour and passion, hired assassins and feuds between powerful aristocratic families… La Compagnia del Madrigal’s rendition of Marenzio’s madrigals is captured by, and presented with, the Glossa production hallmarks you would expect.

the singers infuse their accounts with the true spirit of chamber music and, as native Italian speakers, are highly responsive to the drama and nuances of the texts...offering ardent and expressive readings to convey heady emotions and vibrant imagery. The sound is lush but never forced, individual lines are sharply etched while ensemble and intonation are flawless.

This CD by the superb Compagnia del Madrigale is something of a masterclass in madrigal singing…[a] perfect blend of clearly defined voices, achieved interestingly without a conductor…this CD confirms Luca Marenzio as one of the most underrated madrigal composers in spite of recent efforts to bring his music to wider attention.

Self-critical perspective is clearly not a problem for these artists ... the unfurling description of of a lover's kisses permit all kinds of glorious opportunities for the singers' seemingly telepathic understanding for chiaroscuro, impeccable tuning and innate grammatical sense

There can be little doubt that right now La Compagnia del Madrigale is worldwide the best ensemble for the performance of Italian madrigals … The result is a very compelling disc. If you love Italian madrigals you definitely should not miss it

a magnificent collection notable for the dramatic and emotional treatments of the poetry. Led by Rossana Bertini’s secure and beguiling soprano on the top line, La Compagnia del Madrigale make passionate advocates of this extraordinary music.

La Compagnia di Madrigale, who released the first book of Marenzio’s madrigals two years ago, treat these settings rather decorously; though their singing is ravishingly beautiful, some of it is a bit on the reserved side, and there are moments when less chasteness and a bit more earthiness would be welcome.

this album sets a new standard for madrigal performance. The singing is effortlessly serene and polished, yet the voices can turn to harsh and anguished in a split second when the text demands it; the balance (both in terms of volume and of importance of the voices – the group credits no conductor and jointly produced the disc) is ideal; and Glossa’s customary excellent engineering means that the singers are captured beautifully.