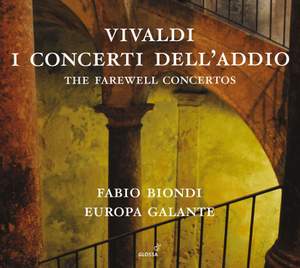 This is a real homage to the baroque bow … his [Vivaldi’s] music has that chameleon way of being almost unrecognisable from player to player and almost without fail he’s as I want him to be... — Gramophone Magazine, April 2015 More…

Since the early 1990s, Antonio Vivaldi and Fabio Biondi have become inseparable. In his latest recording for Glossa, the latter offers further proof of the astonishing imaginative powers of Vivaldi as a composer of violin concertos, which are matched by Biondi’s own dynamic and cultured virtuosity as violinist (and director). With these 'Farewell' Concertos Biondi turns to works written by a Vivaldi very near the end of his life as he travelled to Vienna in a desperate search for creative opportunities.

Where Biondi’s recent 'Il Diario di Chiara' release saw a late Vivaldi surrounded by colleagues and successors at the Pietà in Venice, 'I concerti dell’addio' sees him in a Vienna in mourning for its recently-deceased emperor and more attuned to the now-fashionable galante style than to that of the Red Priest, however brilliant and ebullient Vivaldi’s compositional spirit continued to be.

The six concertos on this disc are all drawn from a collection sold in 1741 – very cheaply it seems to the count Vinciguerra Collalto - today kept in Brno, and bear witness to Vivaldi’s late style as it headed in the direction of Tartini and Locatelli.

Biondi’s selection of concertos provides him full scope to portray the vivid and masterfully-conceived imagery, a compendium of violin techniques and the opportunities for improvisation implicit in Vivaldi’s maturity.

This is a real homage to the baroque bow … his [Vivaldi’s] music has that chameleon way of being almost unrecognisable from player to player and almost without fail he’s as I want him to be when he’s being played by Biondi; what you get here is a performance of profound artistry ... the subtleties in this disc just take my breath away