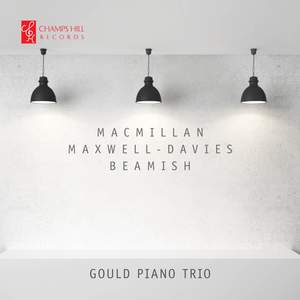 The Gould Piano Trio bring tremendous warmth, precision and integrity to their performance and this Champs Hill recording is outstanding in its clarity and intimacy. — BBC Music Magazine, August 2015, 5 out of 5 stars More…

The works on this album invite quiet contemplation of worlds far removed from the distractions and sensory overload of city life and, increasingly, of life lived before screens or behind screens. The composers represented here all have a connection with Scotland, as do many of their compositions.

After the Gould Piano Trio’s long acquaintance with the riches of James MacMillan's Fourteen Little Pictures, they were delighted when he agreed to write a 2nd piano trio for them. They said ‘Nothing could have prepared us for the contrasting nature of the new work - embracing high spirits and an element of comedy, rather than the emotionally moving and intense narrative of his earlier work’.

Composer and viola player Sally Beamish moved to Scotland and joined James Macmillan in contributing to a rapidly growing Scottish contemporary arts scene. The term ‘piobaireachd’, known to many by its anglicised equivalent, pibroch, refers to a distinct genre within the Highland bagpipe tradition. “It is thought by some that the Pibroch may have been brought to Scotland from Cremona in Italy in the Fifteenth Century by the MacCrimmons”, notes the composer, “and so [it] may well have roots intertwined with those better-known baroque and classical variation forms, such as the Chaconne”.

Peter Maxwell Davies found inspiration for his Piano Trio in the remote and desolate land of Fair Isle, midway between his home on Sanday and the Shetland Isles, where changing winds and weather patterns can rule on matters of life and death.

Recently compared to the Beaux Arts Trio by the Washington Post for their ‘musical fire’ and dedication to the genre, the Gould Piano Trio continue to bring the masterpieces of their repertoire to an ever-widening public.

The Gould Piano Trio bring tremendous warmth, precision and integrity to their performance and this Champs Hill recording is outstanding in its clarity and intimacy.

Throughout this programme, the Gould Trio impress by their commitment, expertise and idiomatic understanding.

The Gould Piano Trio give wonderful performances of all these works which will be hard to beat. They show a real affinity with and understanding of the music.