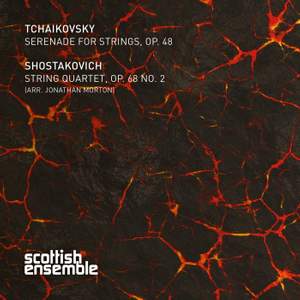 Under the directorship of Jonathan Morton, Scottish Ensemble adds the Tchaikovsky Serenade, regarded by the composer as one of his finest works, to its impressive Linn discography.

Imbued with the classical spirit of Mozart, but with Tchaikovsky’s style to the fore, the Serenade contains some strikingly effective scoring and an exhilarating Finale the ensemble relishes.

SE brings the same level of precision and finish you would expect from a string quartet; this is particularly evident in the elegiac third movement, one of Tchaikovsky's most inspired musical moments.

This recording also marks the premiere of Jonathan Morton’s 2013 transcription of Shostakovich’s Quartet No. 2.

Drawn to the work’s large, epic scale and the richness of its sound-world, Morton was keen for the ensemble to tackle this masterpiece from the chamber repertoire.

With his arrangement Morton adds to SE’s enviable reputation for Shostakovich transcriptions established by the late Rudolph Barshai.

The ensemble is known both in the UK and internationally for its versatility and ambitious programming.

Performing standing up, the individual layers bring an energetic and passionate dynamic to every performance.

Alongside performances across Scotland, SE presents an annual series of concerts at Wigmore Hall and has appeared at BBC Proms and the Edinburgh International, City of London, Aldeburgh and St Magnus.

Morton keeps the Tchaikovsky rhythmically lithe and buoyant...emphasising the composer's neo-classical sensibility in emulation of his beloved Mozart. The feather-light waltz dances exuberantly, free of balletic thrust...Expertly played, immaculately paced and skilfully shaped, all I missed [in the Shostakovich] was a sense of implied threat

Built around a dozen string players, the Scottish Ensemble is a byword for vigorous music-making, combining the prowess of solo playing with the discipline of small-scale ensemble...The Scottish Ensemble’s crystal-clear playing is a joy.

Tchaikovsky’s oft-recorded Serenade for Strings is given fresh impetus here by the Scottish Ensemble, rich in sonority, precise in articulation, mellifluous in the flow of string textures and dynamic shading...This is a performance that highlights Tchaikovsky’s inventiveness and skill in crafting a piece for strings alone, while at the same time generating a real sense of inspired spontaneity.

The main interest here is Jonathan Morton’s new string-orchestra arrangement of Shostakovich’s Second String Quartet, with Morton himself leading the excellent Scottish Ensemble...Plus a wiry performance of Tchaikovsky’s Serenade for Strings — sinuous rather than lush, but superbly virtuosic.