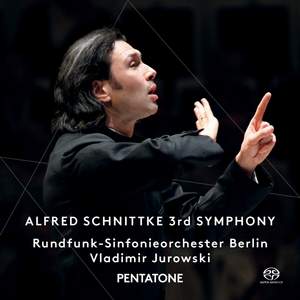 It’s the willingness to embrace [Schnittke's] eclectic mix that for me is the success of this recording; although frequently baffled and staggered at the constant shifts from one idea to the... — Jame Longstaffe, Presto Music, 16th February 2015 More…

Recording of the Week,  Schnittke from Vladimir Jurowski and the Rundfunk-Sinfonieorchester Berlin

One hundred and eleven musicians celebrating a large-scale symphony that sounds like Gustav Mahler, Richard Strauss, or Arnold Schoenberg. In fact, the composer of this symphony, Alfred Schnittke, had precisely these composers (and many others) in mind back in 1981. Whereas he initially mirrored certain styles from figures as Mahler, Mozart, Bach, Stravinsky, Prokofiev and Shostakovich, he was soon also borrowing concepts from “trivial music”, folklore, jazz, tango, as well as many other styles. He himself described his compositional technique, but an aesthetic programme: a serious effort to break through the vicious circle of the self-satisfied and self-sufficient avant-garde music.

Alfred Schnittke’s 3rd Symphony testifies all this searching, this “in-betweenness”. The four-movement work – an opening Moderato, followed by an Allegro, a long movement marked Allegro pesante, with the briefer finale marked Adagio – was commissioned for the ceremonial opening of the new Gewandhaus in Leipzig. He used the prestigious commission from Leipzig as a moment to confront not only the multi-layered historical past, but also the weakened current state of affairs while remaining highly respectful of the achievements of both the past and the present.

Released on SACD by Pentatone, this symphony is recorded with Vladimir Jurowski conducting the Rundfunk-Sinfonieorchester Berlin. Jurowski states, “He (Schnittke) was not alone in his capacity of ‘seismograph of the cultural nightmares of his/our present”. The conductors insightful, unique reading and his collaboration with an orchestra who are on top form undeniably produced nothing less that a magnificent tribute to Schnittke’s great and intricate score.

It’s the willingness to embrace [Schnittke's] eclectic mix that for me is the success of this recording; although frequently baffled and staggered at the constant shifts from one idea to the next, I was completely sold on the piece by the commitment and virtuoso performance of the musicians. Great fun indeed, and well worth a listen!