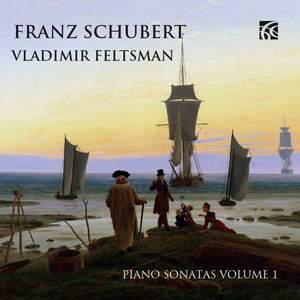 I. Allegretto in B-Flat major

Schubert has been described as the last 'classical' and as the first 'romantic' composer, but it is really impossible to pin a meaningful label on him. He was, and still is, a very special case, a lonely figure in musical history, a dreamer who brought into music a degree of intimacy, despair, hope and disappointment previously unknown. Schubert was a sincere, shy and vulnerable man (though did not lack confidence in himself as an artist), and his personality is clearly reflected in his music.

Schubert found his voice early (the song 'Erlking' was written in 1815 when the composer was only eighteen) and produced an incredible mass of work. His productivity peaked in 1828, the last year of his life, with a staggering explosion of creativity unparalleled in musical history – the coda of Schubert’s life was humanly devastating and creatively triumphant. Schubert wrote more than six hundred songs and his experience of working with poetry was crucial to his art. He learned how to tell a story and create an atmosphere in the limited space of song, how to compress his material in the most direct and effective way. Schubert’s musical language and his perception of the world were poetic and many of his works could be seen as intimate diaries or private meditations. His music resonates with the belief of Novalis (a visionary, and one of the most influential personalities of German Romanticism) that poetry is the highest form of language.