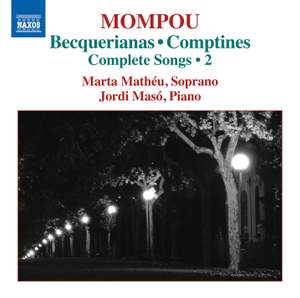 No. 3. Yo soy ardiente, yo soy morena

Becquerianas, one of his most ambitious and also one of his most diverse, with its unprecedented fusion of Andalusian folk-music, virtuosic piano writing and vocal opulence. Comptines, by comparison, are joyful and simple traditional children’s counting rhymes. Also included are five recently discovered songs: Et sento que véns, Ets l’infinit, El testament d’Amèlia, Ave María and El viaje definitivo. ‘… an enticing first offering in a welcome series, and the performers are warmly to be applauded’ (Fanfare on Volume 1 / 8573099).

Mompou is best remembered for his series of beautiful solo piano works composed from the 1920s until the 1980s. He died in 1987. These have been recorded by a number of pianists, most recently by Volodos – a disc that brought Mompou renewed attention that may spill over into his songs, which are much rarer to find on disc. This is the second and last volume of the complete cycles and single songs (the first volume was on 8573099). Coincidentally a disc that replicates a number of the songs in volume 2 has just been released by Opus Arte featuring Roger Padullés and Iain Burnside. The difference is that our disc is sung by a soprano. It also has the advantage of Jordi Masó, a critically-acclaimed specialist in Spanish piano music whose 6 volumes of the solo piano music have won great critical reviews.