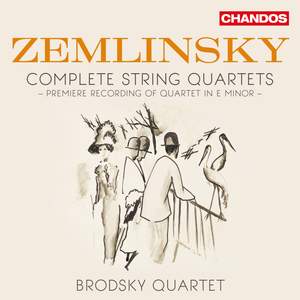 [the String Quartet in E minor] is played with commitment and elegance. As for the numbered quartets, I was impressed by the Brodskys' forthright and uncompromising approach to the dark and desolate... — BBC Music Magazine, April 2015, More…

Recording of the Week,  Zemlinsky String Quartets from the Brodsky Quartet

In this recording of the complete String Quartets by Zemlinsky, which includes a premiere recording, the Brodsky Quartet gives fresh life to the composer’s works, ‘with a spirit so transformational you felt they were actually improving the world’, as reported by The Strad after a recent concert performance. The four string quartets which Zemlinsky published represent a journey through his musical thought. It starts with the Brahmsian, youthful Quartet in A major, Op. 4 which is generously proportioned and less earnest in mood than some earlier works. Then the Second Quartet, Op. 15 echoes the composer’s years of emotional crisis. The booklet essay explains the symbolism which Zemlinsky deployed in the score, evoking the compromising relationship between his sister Mathilde and his friend Schoenberg, as well as his own disillusioned love affair with Alma Schindler. Contrastingly, the Third Quartet, Op. 19 appears to be a sarcastic protest against modernism, in which Zemlinsky exploits a minimum of material to maximum effect, the entire fabric evolving from the intervals and rhythms of the opening theme. Having been blacklisted by the Nazi campaign against ‘degenerate’ art, the Fourth Quartet, Op. 25 achieved its first public performance in 1967, thirty years after its composition. It deploys a wealth of thematic ideas in a process of continual variation and metamorphosis that follows the outlines of sonata form. The String Quartet in E minor failed to pass its trial at the Viennese Tonkünstlerverein when it was first presented in 1893. It was not published until 1997 and appears here on disc for the first time. The opening movement spins a sophisticated net of motivic relationships, harmonic ambiguities, and metrical irregularities. From the simplicity and melodic charm of the Andante and scherzo to the energetic and inventive finale, the quartet is a remarkable legacy of Zemlinsky’s early command of string texture.

[the String Quartet in E minor] is played with commitment and elegance. As for the numbered quartets, I was impressed by the Brodskys' forthright and uncompromising approach to the dark and desolate Fourth...Their version of the Third is also illuminating, presenting the first movement in a much more highly wrought Romantic manner than does other accounts.

The Brodsky Quartet play with intensity compositions that chart a journey from the romantic to the modern.

[This set] from the Brodsky - with its warmly focused sound and detailed notes by Anthony Beaumont - should certainly be considered for those wishing to get to know this 'dark horse' among quartet cycles of the early twentieth century.

Perhaps it’s something to do with their own wide-ranging repertoire and finely-honed ability to move between idioms and sound-worlds, but the Brodskys really do work wonders with [No. 2's] slippery, uncompromising modernism... the balance between achieving blend and maintaining clarity, for instance, is masterfully realised in the ambiguous, shape-shifting middle stretches of this elusive single-movement work.

Zemlinsky is a vital, underestimated figure...The Brodskys do passionate justice to the four published quartets, composed between 1896 and 1936. They also offer a welcome premiere recording of the meaty E minor quartet.