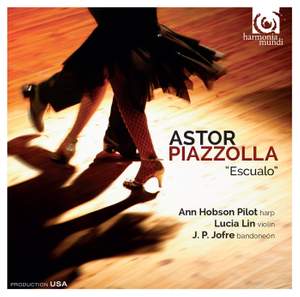 The resonant sound of harp strings might seem as inimical to Piazzolla's trademark writing as, say, the organ, but in Ann Hobson's Pilot's hands it sounds very natural. That is also a tribute... — Gramophone Magazine, March 2015 More…

The name of Astor Piazzolla is synonymous with the word tango. A musical ambassador who carried the signature sounds of Argentina’s cafes and nightclubs to concert halls around the world, his instantly recognizable compositions (attractively arranged here for harp, violin and bandoneón) are infused with elements of jazz, fusion and even classical baroque.

Escualo (1979), which translates literally as ‘shark’, is renowned among Piazzolla’s output for its devilish violin part, combining virtuosic double-stopping techniques with complex rhythmic patterns and sudden metrical shifts that threaten to wrongfoot the listener. The ‘shark’ of the title is not the music itself, which certainly has a fearsome bite, but the animals Piazzolla wrestled with while shark-fishing in Punta del Este, Uruguay, during his summers there.

Argentine musician-composer-arranger J. P. Jofre is hailed as the premier bandoneonista of our time, whose virtuosity astonishes critics as well as his growing legion of fans. His soulful, artful playing of the bandoneón has been praised by the New York Times.

The resonant sound of harp strings might seem as inimical to Piazzolla's trademark writing as, say, the organ, but in Ann Hobson's Pilot's hands it sounds very natural. That is also a tribute to the skill of the arrangers and all the music here...She plays Piazzolla here as if born to it and the partnership with violinist Lucia Lin is enchanting.

It is elegant, smooth and refined, if perhaps lacking that essential whiff of smoky bordello.