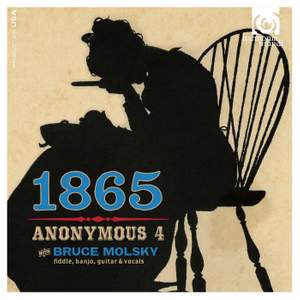 Songs of Hope & Home from the American Civil War

It's a superbly put together sequence...Some of the tunes are very familiar, but gain an extra poignancy in this album's programme by the cumulative impact of juxtaposition, and the dignified... — BBC Music Magazine, April 2015, 5 out of 5 stars More…

Henry Tucker: Weeping, Sad and Lonely, or, When this Cruel War is Over

J.H. McNaughton: The Faded Coat of Blue, or, The Nameless Grave

anon.: The Maiden in the Garden

Work, H C: The Picture on the Wall

Lowry, R: Shall We Gather At The River

The songs of the Civil War era tell a story about life in volatile times, with the feelings evoked by the music and lyrics – longing and grief, faith and patriotism, nostalgia and hope – utterly resonant for us even 150 years after the conflict’s end.

These are deeply human feelings, universal and timeless. While many of these songs are like discoveries in an old family chest, some are still familiar to us now. The melody of the Elvis Presley hit “Love Me Tender,” for example, can be traced back to the mid-19th-century tune “Aura Lea,” while “Shall We Gather at the River?” and Stephen Foster’s “Hard Times” remain standards in the American treasury of song. For the group’s final album before disbanding, after nearly 30 years together, Anonymous 4 has recorded the astutely researched, warmly performed '1865: Songs of Hope and Home'. With this release, Anonymous 4 not only caps its best-selling, prize-winning harmonia mundi discography; the album also completes a trilogy of Americana recordings, begun with 'American Angels' and 'Gloryland', which broadened the reach of a group renowned for its searching, affecting programs of medieval European repertoire. As with their previous Americana albums, Anonymous 4 – Ruth Cunningham, Marsha Genensky, Susan Hellauer and Jacqueline Horner-Kwiatek – sought out collaboration within the folk music community. The featured guest on 1865 is Bruce Molsky, whose fiddle, banjo, guitar and vocals are a galvanising presence. Offering advance praise for the album, National Public Radio called it “gorgeous.”

It's a superbly put together sequence...Some of the tunes are very familiar, but gain an extra poignancy in this album's programme by the cumulative impact of juxtaposition, and the dignified humility of Anonymous 4's interpretations...Altogether this is a moving disc, immaculately documented and presented.

This is an understated, yet heartfelt, way to signal the end of 30 years of glorious music-making – exactly the qualities that hjave distinguished Anonymous 4 since the beginning.