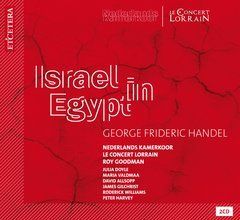 Israel in Egypt (HWV 54 ) is without a doubt one of Georg Friedrich Handel’s most captivating oratorios. One that has an unusual role set apart for the choir. The biblical story of Israel’s crossing through the desert to the Promised Land and the plagues God spills over Egypt are sublimely captured in Handel’s score from 1738.

The Nederlands Kamerkoor and Le Concert Lorrain have recently made a very successful tour with this oratorium through France and Germany. The much-celebrated Roy Goodman conducted an intensely charged concert in the Verdener Dom during the Musikfest Bremen. The riveting concert was recorded live by Deutschland Radio with James Gilchrist, Peter Harvey, Roderick Williams, David Allsopp and Julia Doyle performing the few solo parts this magnificent work of art holds.

The pacing and articulation of the excellent band Le Concert Lorrain are consistently insightful and sympathetic, and the accomplished Netherlands Chamber Choir offer plenty of merits...The full range of choral moods and colours emerges successfully...Gilchrist's singing brims with dramatic vigour.