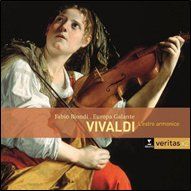 Vivaldi’s Op.3 has been called the most influential collection of instrumental works to appear during the eighteenth century. This corpus made an enormous impression on European musical taste – even on Bach who transcribed six of them – and established the three-movement solo concerto as the norm. This 1998 recording by of one of the most skilled period-instrument ensembles, Europa Galante lead by Fabio Biondi, remains a milestone reference recording. ‘Listening to these performances, I once again felt some of the thrill and excitement that affected me on hearing this music for the very first time’ Gramophone