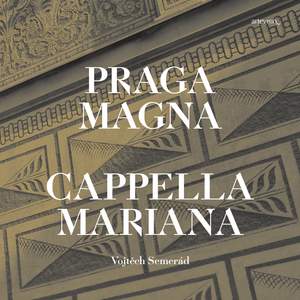 [Monte's music is] unimpeachably well made, and its own reluctance to draw attention to itself might be considered a positive attribute. When performed as sympathetically as here, it is very... — Gramophone Magazine, May 2015 More…

Towards the end of the 16th century, Emperor Rudolf II moved the Habsburg capital from Vienna to Prague. The arts-loving monarch invited to his court the finest contemporary artists, thus turning the provincial city into a culture centre of Renaissance Europe and affording it a lustre comparable with that of royal residences in France and Spain. The Emperor also brought to Prague his musicians. The Rudolfine orchestra performed various duties – in addition to fulfilling the task of representing the court at ceremonies, it was also encharged with attending to liturgical music. The core of this recording is the Missa Confitebor tibi Domine for eight voices by the Rudolfine Kapellmeister Philippe de Monte (1521–1603), the last of the great creators of Franco-Flemish polyphony. The album affords the listener a unique insight into the musical world surrounding Rudolf II, a world as beautiful and refined as the Emperor’s extensive collection of paintings, sculptures and other artefacts. The young vocal ensemble Cappella Mariana present a repertoire typical of their focus discovering and performing lesser-known Renaissance polyphonic pieces, often giving their modern time premieres. The vocal parts are delivered by Hana Blažíková, Barbora Sojková, Tomáš Král and other renowned singers.

[Monte's music is] unimpeachably well made, and its own reluctance to draw attention to itself might be considered a positive attribute. When performed as sympathetically as here, it is very enjoyable to listen to...The overall sound is well blended, the individual timbres are most attractive and the sense of dedication and commitment is obvious.