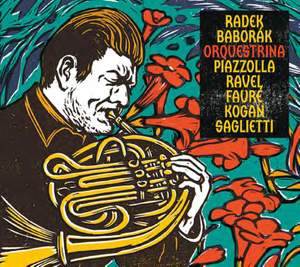 Saglietti: Suite for Horn and Strings

The world renowned French horn player Radek Baborák has chosen for his new album “Orquestrina” compositions inspired by dance in its various forms; alongside compositions by famous authors as Astor Piazzolla (Histoire du tango), Gabriel Fauré (Pavana) or Maurice Ravel (Boléro) the album also contains works less known, including Lev Kogan´s dances and songs rooted in Jewish music, Corrado Saglietti´s suite for horn and a string quartet and three small pieces for solo horn. The fifteen member ensemble is made of great soloists and chamber music players. Many of the compositions are presented here for the first time in newly created arrangements. The album is full of energy and masterful performances and undoubtedly it shall become an event of the year, not only within Czech music scene.