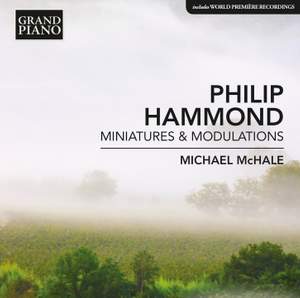 The Little and Great Mountain

Have You Seen My Valentine?

The Parting of Friends

Carolan: The Lamentation of Owen O'Neil

Belfast-born composer, teacher and performer Philip Hammond has received commissions from some of the world’s leading soloists and ensembles, such as the Ulster Orchestra, the Brodsky Quartet, James Galway, Tasmin Little, Barry Douglas and Nikolai Demidenko. Also active as a broadcaster and writer, he is a prominent presence on radio and television, and has organised a series of important festivals and innovative arts events.

Belfast-born Michael McHale has established himself as one of the leading Irish pianists of his generation. Since completing his studies at Cambridge University and the Royal Academy of Music, he has developed a busy international career as a solo recitalist, concerto soloist and chamber musician. Michael has performed at many important musical centres, and for TV and radio broadcasts throughout Europe, Asia, North and South America.

In addition to winning first prize and the audience prize at the prestigious Terence Judd/Hallé Award finals in 2009 (previous winners include Nikolai Lugansky and Stephen Hough), Michael was awarded the Brennan and Field Prizes at the 2006 AXA Dublin International Piano Competition and the 2005 Camerata Ireland/Accenture Award. His teachers and mentors include John O’Conor, Réamonn Keary, Christopher Elton, Ronan O’Hora and Barry Douglas.