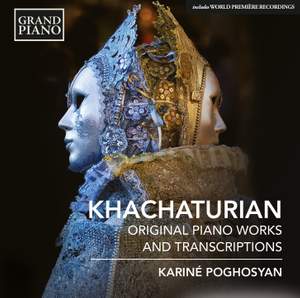 [Kariné Poghosyan's] slight frame belies the power that she can unleash when necessary...this fiery Armenian pianist [brings] an excitement to the music that Khachaturian would have found as... — MusicWeb International, April 2015 More…

Renowned for his great ballet scores, Aram Khachaturian was the most significant 20th century musical figure in the then Soviet Republic of Armenia. The combative Poem is amongst his earliest piano works, while the Toccata is a fine example of virtuosity in the Russian tradition. The formally classical Piano Sonata contrasts abstractness with popular appeal in the Adagio from Spartacus and bittersweet moods in Masquerade.

The Armenian pianist Kariné Poghosyan made her orchestral début at fourteen playing Beethoven’s Piano Concerto No.1, and her solo Carnegie Hall début at 23, and has since gone on to win numerous awards as well as performing in some of the world’s most prestigious concert halls. Her music studies began in her native Yerevan in Armenia at the School of the Arts No.1, continuing at Romanos Melikian College and the Komitas State Conservatory. After moving to the United States in 1998, she received her BM, summa cum laude, from California State University in Northridge. She is currently based in New York, where she teaches at the Manhattan School of Music.

[Kariné Poghosyan's] slight frame belies the power that she can unleash when necessary...this fiery Armenian pianist [brings] an excitement to the music that Khachaturian would have found as riveting as I did. Any lover of solo piano music cannot fail to find this disc a worthy and valuable addition to their library.