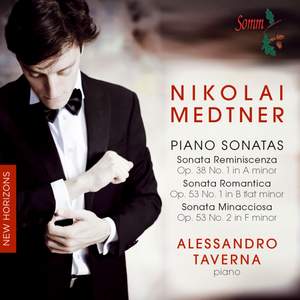 The grand scale and imposing architecture of the Reminiscenza, Romantica and Minacciosa sonatas…are superbly grasped by the Italian Alessandro Taverna…this first class recording, with its thought-provoking... — Gramophone Magazine, May 2015 More…

We welcome this month, an exciting new addition to our catalogue in the New Horizons Series in which SOMM supports young musicians of great talent by providing them with the opportunity of promoting their careers worldwide in top quality recordings.

Born in Venice in 1983, Alessandro Taverna has already won numerous awards, including 1st prize in the Minnesota International Piano Competition, 2nd prize in the London international Piano Competition (playing the Chopin Concerto No. 1 with James Judd and the LPO at the Royal Festival Hall (“50 minutes of flawless poetry – this young Italian is remarkable…”The Independent) and Bronze Medal at the Leeds International Piano Competition. In September 2011 he won the Arturo Benedetti Michelangeli Prize as well as the Premio Giuseppe Sinopoli. Alessandro has already built an impressive career and has toured extensively in Europe, US, Canada and South Africa. On hearing him the late Lorin Maazel invited him to perform, this year, the Prokofiev Third Piano Concerto with the Munich Philharmonic in Vienna’s Musikverein. A documentary of his life and his performances at the Leeds Piano Competition was shown on BBC4.

The Russian pianist composer Nikolai Medtner was a great friend and colleague of Rachmaninov. He too, left Russia after the 1917 Revolution, eventually living in London, where he died. In London, HMV recorded his three piano concertos and many of his other piano compositions played by Medtner himself. Rachmaninov dedicated his Fourth piano Concerto to him and Medtner dedicated his own 2nd Concerto to Rachmaninov.

Medtner’s contribution to the piano music of the early 20th century was important. His music is traditional, melodious, brilliantly laid out for the piano and calls for great piano technique. The three Sonatas on this CD show Medtner’s range very well. Alessandro has made a special study of his music, which he plays to perfection.

The grand scale and imposing architecture of the Reminiscenza, Romantica and Minacciosa sonatas…are superbly grasped by the Italian Alessandro Taverna…this first class recording, with its thought-provoking booklet, is well worth hearing.

They’re fine interpretations, and remind us that Medtner’s restless music has its antecedents in Chopin’s poetic detail and Liszt’s expansive form, while at the same time inhabiting a disorienting harmonic territory that is uniquely its own...[The Reminiscenza and Romantica] are both exemplary in their dynamic, emotional and architectural control.