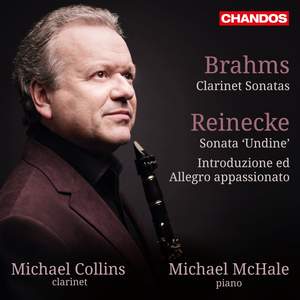 Brahms called Muhlfeld 'a master of his beautiful instrument', an epithet that could be extended to Collins who, with McHale, offers joyous performances of these lyrical but unsurprisingly cogent... — Gramophone Magazine, March 2015 More…

On this CD, Michael Collins performs Brahms’s and Reinecke’s clarinet sonatas with the pianist Michael McHale. Their collaboration on Chandos has been successful, from their Lyrical Clarinet album – which received five stars from BBC Music (performance and recording) – to their two acclaimed volumes of British Sonatas, a ‘self-recommending Chandos series’ (Musicwebinternational. com).

The two clarinet sonatas were written after Brahms had declared that his compositional career was at an end. He dedicated them to the clarinettist Richard Mühlfeld, whom he much admired. Even if the composer described them as ‘two modest sonatas with piano’, these are works of moving and dramatic intensity, with both the first movement of the F minor and the central Scherzo of the E flat Sonata marked Allegro appassionato. Michael Musgrave (a Brahms specialist) indeed associates the F minor key of No. 1, so often used by Brahms, with ‘passionate, rhetorical expression and formal adventure’; lyrical expressivity is most evident in the serene music of the first movement of No. 2. The latter is unconventionally in three movements, each in the tonic key, and this tonal planning unfolds as a single, continuous, and circular design.

Brahms’s works were devotedly promoted by the composer, conductor, pianist, and teacher Carl Reinecke, whose prodigious output has not fared as well as the music of Brahms, though the chamber music has perhaps proved relatively more durable. Both the Sonata Undine, originally written for flute and piano, and Op. 256 refer to works by Schumann, respectively Kreisleriana and the Concertstück, Op. 92 for piano and orchestra, also known as ‘Introduction and Allegro appassionato’.

Brahms called Muhlfeld 'a master of his beautiful instrument', an epithet that could be extended to Collins who, with McHale, offers joyous performances of these lyrical but unsurprisingly cogent works...This is a most desirable issue, with a recording that balances the two instruments perfectly.