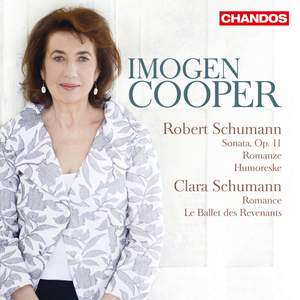 Cooper has a thorough command of the Schumann language in the major works buttressing her recital...judiciously differentiated, finely balanced and sustained by a compelling impulse. — Gramophone Magazine, March 2015 More…

This is the eagerly awaited second volume in the new collaboration between Chandos and Imogen Cooper. In this series, she brings her virtuosity and poetic touch to the repertoire of one of the central German romantic composers. Known as a Schubert expert, she has recently turned to Schumann in an equally successful way, which she proved in her much lauded first volume (CHAN10755). The Snape Maltings concert hall and Nicholas Marston’s detailed notes are respectively ‘an excellent complement’ (musicwebinternational.com) and ‘an added bonus’ (Gramophone) to the series.

This album is an implicit dialog between the two Schumanns, the presence of words sensed at every point: from the Lied-like melody in the love duet that is Robert’s ‘Romanze’ to the Humoreske, an imaginary song inspired by Clara. Even the Sonata was dedicated to Clara, ‘by Eusebius and Florestan’ who represent the dual poetic sides of Schumann’s nature. This imaginary world was the frame for Clara’s ‘Scène fantastique’ – renamed ‘Doppelgänger Chorus’ in the long, yet often passionately hopeless, correspondence which Clara and Robert carried on during their courtship.

Robert Schumann’s Sonata No. 1 is also one of the most emblematic pieces in the romantic repertoire for piano, in which, as Imogen Cooper explains, ‘a much darker side of Schumann is at work, one that is frenetically driven, as if with no inner parameters to guide him’. She adds: ‘Great energy, emotional and physical, is needed from the performer, and great willingness from the listener, who must open him- or herself to this somewhat rollercoaster experience, without defences.’

Cooper has a thorough command of the Schumann language in the major works buttressing her recital...judiciously differentiated, finely balanced and sustained by a compelling impulse.

Cooper asserts her stylistic credentials right at the start of the disc in Robert’s Humoreske, playing with a warm, golden tone and fluidly finding that distinction between the extrovert and introvert traits that were key to Schumann’s musical personality.