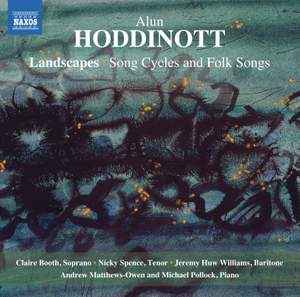 Spence’s clear and incandescent voice has ringing tone and laser-like intensity, but it’s not just a splendid sound; his reading of the songs shows discriminating interpretive skill...As with... — American Record Guide, March 2015 More…

No. 1. In Pontypriss My Love Doth Dwell: Andante

No. 4. The Ragged Wood: Moderato

No. 3. If She Were Mine: Allegretto

No. 5. The Golden Wheat: Andante

No. 6. The Fairest Gwen: Allegretto

Alun Hoddinott dominated musical life in his native Wales for over half a century. One of the most versatile and gifted composers of his generation he excelled in all genres, from operas and symphonies to piano sonatas. This recording brings together all of his songs for high voice and piano, revealing the vivid atmosphere he was able to evoke in each setting. It includes his Six Welsh Folksongs and his last vocal work, Towy Landscape, for soprano, baritone and piano duet, Hoddinott’s epilogue to a lifetime of writing for the voice.

This is another of the discs released by Naxos that were originally issued by the British Music Society on their own label [BMS437CD]. Alun Hoddinott is Wales’ greatest composer, versatile, prolific and international in outlook. Cardiff’s new major concert hall is named in his honour. Songs play an important role in his output, many for high voice – this was the first disc to bring together all his songs for high voice and piano, but also includes his arrangements of Welsh Folksongs and his last work, for soprano, baritone and piano called Towy Landscape. This will appeal strongly to lovers of British song on disc.

Spence’s clear and incandescent voice has ringing tone and laser-like intensity, but it’s not just a splendid sound; his reading of the songs shows discriminating interpretive skill...As with their volume of Dove songs, Matthews-Owen is the star of the show. He handles Hoddinott’s filigree textures with delicacy, its declamatory thundering with authority.

Hoddinott's accompaniments never mask the vocal line, so that Spence's bright young tenor and crystal-clear diction ring out as clear as a bell.

a welcome reminder of his prowess as a prolific setter of English words. Like his friend Benjamin Britten, he was inspired by particular singers...Spence, who bears the brunt of the set with immaculate diction and musicianship, and Claire Booth are worthy successors.