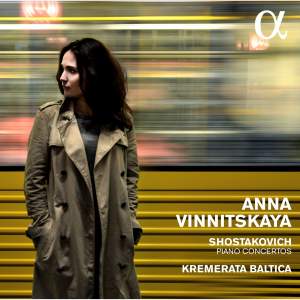 Vinnitskaya and Kremerata Baltica collaborate in a particularly alert and responsive performance [of the Second Concerto]: the outer movements are perky and playful, and the well-loved slow movement,... — BBC Music Magazine, September 2015 More…

Shostakovich: Concertino for Two Pianos in A Minor, Op. 94

Anna Vinnitskaya has now joined Alpha Classics. Her first recording for the label is devoted to one of her repertories of choice: the concertos of Shostakovich.

‘When I performed the Second Piano Concerto for the first time at the age of eleven, his music seemed very optimistic to me. Only later did I understand everything else that is concealed behind the “façade” of Shostakovich’s music.’

[The Russian pianist reveals two facets of the composer’s music on this disc by juxtaposing the First Piano Concerto in C minor op. 35, an ‘insolent’ composition with a kaleidoscope of atmospheres and stylistic registers (Russian Romanticism, American jazz, neoclassicism) that constantly surprise the listener, and the more traditional Concerto in F major, which radiates youthful high spirits.]

A pupil of Sergey Ossipenko at the Serge Rachmaninoff Conservatory, then of the great Evgeni Koroliov at the Musikhochschule in Hamburg, Anna Vinnitskaya won the Leonard Bernstein Prize, but it was her First Prize at the Queen Elisabeth Competition in Brussels in 2007 that launched her career. For this recording, Anna Vinnitskaya is surrounded by partners of the front rank: the famous Kremerata Baltica, regarded as one of the most creative ensembles on today’s musical scene, and the prestigious wind players of the Staatskapelle Dresden.

Vinnitskaya and Kremerata Baltica collaborate in a particularly alert and responsive performance [of the Second Concerto]: the outer movements are perky and playful, and the well-loved slow movement, taken not as slowly as has become standard…conjures a seductive ease rare in Shostakovich.

Her playing is slightly softer-grained than some but that is no bad thing. The composer himself may have been more brittle in touch and more abandoned in phrasing, but a more level-headed approach brings out perfectly valid alternative shades of meaning