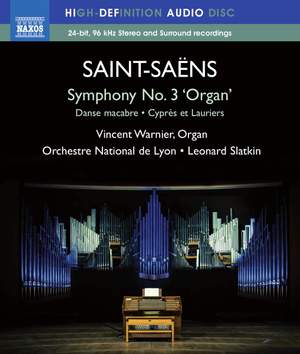 There are no great histrionics here, just really well balanced, thoughtful playing. Slatkin’s handling of the orchestra delivers the most lyrical rendition I’ve heard — Choir & Organ, May 2015, 5 out of 5 stars

To celebrate the inauguration of the newly restored former organ of the Palais du Trocadéro and Palais de Chaillot in Paris, the Orchestre National de Lyon and their organist-in-residence, Vincent Warnier, present two major works for organ and orchestra by Camille Saint-Saëns, both of which are historically linked with the great Cavaillé-Coll organs. The composer himself conducted the French première of Cyprès et Lauriers at the Trocadéro in October 1920, entrusting the solo part to Eugène Gigout.

Camille Saint-Saëns’ inclusion of organ and piano in his Symphony No. 3 in C minor was unprecedented at the time. It was driven – in the composer’s words – ‘ by the progress made in modern instrumentation’. Inspired by Liszt, to whose memory the work is dedicated, it is a spectacular example of music both resplendent and grandiose.

One of the most popular showpieces for organ, the Symphony No. 3 is coupled here with the rare and poignant Cyprès et Lauriers and Vincent Warnier’s revision of Edwin Lamare’s arrangement of Danse macabre – another famous sonic spectacular for solo organ.