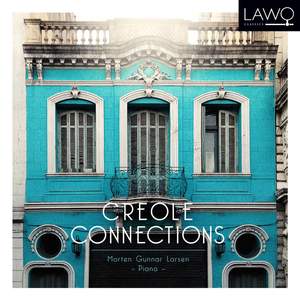 This is winning stuff with more similarities to ragtime than you might expect...Morten Gunnar Larsen is a perfect fit for this music. He has an absolute ball playing everything on the disc, and... — MusicWeb International, May 2015 More…

Larsen studied classical piano at Norges Musikkhøgskole (1978). In 1975 he made his debut recording, Classic Rags and Stomps, for which he won Spellemannprisen 1976. He next founded Ophelia Ragtime Orchestra in 1977 and performed with stride pianist Eubie Blake, to whom Larsen composed Memories of Eubie. Larsen worked in New Orleans over longer periods of time, resulting in a tour and the performance One mo' time (1979–81) written by Vernel Bagneris.

Larsens collaboration with Bagneris continued with the performance Jelly Roll!! - the music and the man, dedicatedJelly Roll Morton, and performed at Oslo Jazzfestival 1990. It also had eleven months at Off-Broadway (1994–95) and published as CD (GHB, 1996). This work gave Larsen the OBIE Award 1995. He had earlier received the Buddy Awardog Foreningen norske jazzmusikeres «Årets jazzmusiker» (1992) in his home country Norway. He participated in several recordings in the Magnolia Jazzband (1974–93) and Ytre Suløens Jassensemble up until 1992 and has participated in Norbert Susemihl's Joyful Gumbo (2011–Present).

This recording is a wonderful example of Larsen as a performer, performing works by Piazzolla, Gottschalk, Ernesto Nazareth and many others, creating a toe-tapping disc which will have you listening again and again to this recording.

This is winning stuff with more similarities to ragtime than you might expect...Morten Gunnar Larsen is a perfect fit for this music. He has an absolute ball playing everything on the disc, and is as deep inside the Creole musical language as anybody can be. It’s an ideal match