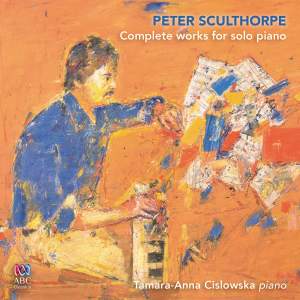 While the colours change, it barely registers whether the music is most-Debussyan impressionism, serial, experimental...Sculthorpe's musical voice and sense of his own land and its cultures is... — BBC Music Magazine, January 2015, More…

Sculthorpe: Short Piece for Pianoforte No. 1

Sculthorpe: Short Piece for Pianoforte No. 2

Sculthorpe: Prelude to a Puppet Show

Sculthorpe: Slow Movement of Sonata No. 1

Sculthorpe: A Little Book of Hours

Sculthorpe: Song for a Penny

Sadly Peter Sculthorpe died recently, so this recording becomes even more poignant. Sculthope is widely acknowledged as the first Australian composer to leave behind the traditions of Britain and Europe, and create a distinctively Australian music. His unique compositional voice is inspired by the land and the history of Australia, and by the cultures of our Pacific Basin neighbours.

His solo piano music is prized for its rich elegance and beguiling simplicity, from the mesmerising beauty of Djilile, based on an Indigenous Arnhem Land melody, to the gentle nostalgia of Left Bank Waltz. This double-CD album begins with the exquisite Falling Leaves, written when Sculthorpe was just 16, and concludes with the vivid and ambitious Riverina, his most recent work for solo piano.

With the tracklist compiled in collaboration with the composer, who celebrated his 85th birthday this year, the recording includes every published piece as well as previously unpublished, unrecorded and even unperformed works. In addition to more famous pieces, there is a range of charming miniatures and a pair of works for prepared piano (Koto Music I and II), all of which confirm Sculthorpe’s reputation as a composer of international repute whose music speaks to the heart of the Australian experience.

Tamara-Anna Cislowska, a friend of Sculthorpe since performing his piano concerto with the Tasmanian Symphony Orchestra at the age of 14, was the composer’s own choice for this recording. Now in her 30's Tamara-Anna is widely acknowledged of Australia's leading pianists first performing publicly on radio at the age of 3.

While the colours change, it barely registers whether the music is most-Debussyan impressionism, serial, experimental...Sculthorpe's musical voice and sense of his own land and its cultures is always beguilingly to the fore...It would be hard to find a more committed or convincing advocate than Cislowska.

Cislowska's great gift is to pick up on the saudade inherent in this distinctive, finely crafted and for the most part lyrical music, and project it outwards in an utterly natural, unforced manner. A profoundly affecting release which will be a revelation to some, to others a homecoming.