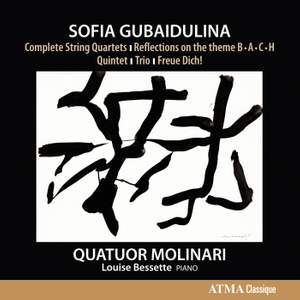 Gubaidulina: Reflections on the Theme B-A-C-H

Gubaidulina: Quintet for piano and strings

Quintet for piano and strings: I. Allegro

Rejoice! Sonata for violin and cello: I. Your joy no one will take away from you

Rejoice! Sonata for violin and cello: II. Rejoice with joy

Rejoice! Sonata for violin and cello: IV. And he returned to his own abode

Following two albums devoted to the chamber music of Russian composer Alfred Schnittke, the Molinari Quartet now plunges into the fascinating world of Sofia Gubaidulina, a Russian-Tatar composer and a remarkable figure in contemporary music. Accompanied by pianist Louise Bessette, the Molinari Quartet plays Gubaidulina’s Quintet for piano, composed in 1957, when she was still a student. Also on the program are her complete string quartets, composed between 1970 and 1993; the string trio composed in 1988; her Reflections on the theme B-A-C-H, a short piece for string quartet in homage to Bach; and Freue Dich!, a sonata for violin and cello.

Internationally acclaimed by the public and the critics since its foundation in 1997, the Molinari Quartet has established a mandate to perform works from the 20th and 21st centuries, repertoire for string quartet, and to commission new works. Recipients of 15 Opus Prizes awarded by the Quebec Music Council, the Molinari Quartet is described by the critics as “Canada’s answer to the Kronos or Arditti Quartet.”

Its recent CDs (Schnittke’s complete quartet cycle and the String Quartets Nos. 8-12 by R. M. Schafer) have received rave revues from, among others, The Strad, Gramophone (two times Editor’s choice) and Fanfare.