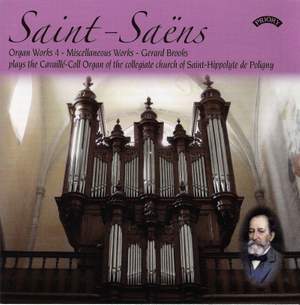 Here are short and single works spanning the composer’s life and a rewarding collection too, played with verve and understanding. — Choir & Organ, May 2015, 4 out of 5 stars

Saint-Saëns: Prélude in A Major

Gerard Brooks completes his in depth survey of the complete organ works of Saint –Saens with a recital on the virtually unknown Cavaille- Coll organ in south east France at Poligny. Unlike other cycles, Priory has recorded on four different French organs which gives the variety for this tuneful repertoire. Brooks has found in his programmes some rare and probably unrecorded material, not least in this recital of 20 short but fascinating works.

"This is fabulous playing and definitely a disc to return to again and again." Organists Review. "Brooks seems to have the sensitivity for the slower sections and the technique for the more demanding pieces...for these pieces Brooks may now be the first choice." American Record Guide

Here are short and single works spanning the composer’s life and a rewarding collection too, played with verve and understanding.