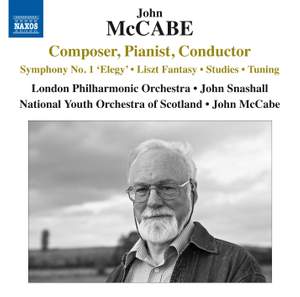 McCabe, J: Fantasy on a Theme of Liszt

This collection brings together several significant recordings of the music of John McCabe, none of which has appeared before on CD. The First Symphony, heard here in its only recording to date, is a work of striking emotional directness and explosive energy. The Fantasy on a Theme of Liszt was described by Harold Truscott as ‘wonderfully organic… a concert piece which should interest any pianist worth his salt’. Scored for very large orchestra, Tuning develops layers of texture and sonority of overwhelming richness. This is the only recording of John McCabe as conductor.

It joins our recent release of McCabe’s choral music, Visions (8573053) was described by BBC Music Magazine as “raptly atmospheric and consummately crafted”, and provides insights into the wide variety of character McCabe’s music has communicated over the years, embracing the importance of his solo piano music and contrasting the focused intensity of the First Symphony against the improvisatory fields of sound which emerge from Tuning. This performance of Tuning was regarded by critic Kenneth Walton as “quite remarkable… [and played with] all-out commitment, consummate skill (especially the wind section of which the bassoons must be the envy of many a professional orchestra), and not a little enjoyment.”

The late John McCabe's superbly articulated piano-playing in his Liszt Fantasy makes the strongest impression. His maverick streak is evident in Tuning, a wry take on the tuning-up process.

McCabe’s quick inventiveness [in the Symphony] takes him well beyond the derivative. The youth-orchestral Tuning (1985) is also impressive.