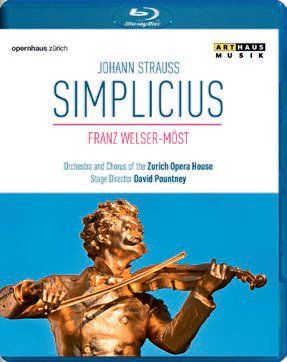 Orchestra and Chorus of the Zurich Opera House, Franz Welser-Möst

The recording of Johann Strauss’ Simplicius works are rare occurrences. So Arthaus Musik is delighted to present this superb version from the Zurich Opera House conducted by Franz Welser-Möst. The British director David Pountney lets the entertaining tale unfold accompanied by the many spectacular effects for which he has become internationally famous.

Monumental props are embellished with skilled, clean-cut directing work, seasoned with a healthy portion of black humour. In the final scene, the audience sees a dramatic gallows, dangling from which are numerous corpses, all turning in time to the music of a waltz.

Strauss himself loved this work. It was the last of his stage works for which he conducted the premiere performance. He described it as “generally speaking a much more cheerful work than Der Zigeunerbaron”.

Strauss’s felicitous orchestration, langurous melodies and endless inventiveness ensure over two hours of pleasure for all who invest in this unique piece of theatre.