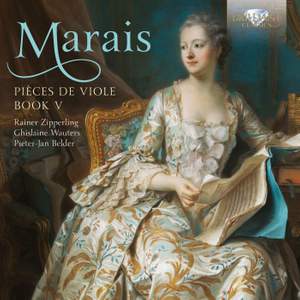 It is surprising that so little is known about Marin Marais today, as he could be considered one of the most important French composers of the Baroque period. Born in 1656, the son of a shoemaker, Marais spent his entire life in Paris. His musical career began when he joined the choir of the Sainte‐Chapelle, but when his voice broken he decided to learn the viol, studying with the renowned bass viol player Sainte‐ Colombe, who had a profound influence on the young Marais. Marais went on to enter the royal orchestra and the orchestra of the Académie Royale de musique, where he performed and studied composing under Jean‐Baptiste Lully. He was hailed as the greatest bass viol player of his time, and is said to have played the viol “like an angel”. Marais's vast output for the viol (over 800 pieces!) is astonishingly varied, original and affecting – no other composer has written so many works of such high quality for the instrument. The fifth and final book of Pièces de viole showcases Marais's art at its most mature and sophisticated, and includes a wider range of musical forms and techniques than the previous four books. Although the fifth book contains many of the conventional dance forms that listeners would expect to hear in a Baroque suite, there are many remarkable descriptive pieces that justify the claim that Marais was the first composer of programme music. A particularly striking example is the “Tableau de l'Opération de la Taille” from the final Suite: an extraordinarily detailed musical depiction of an operation to remove a gall stone that the composer underwent!