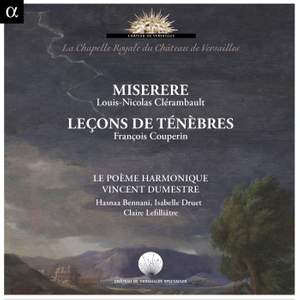 These performances, in a nicely-captured resonant acoustic, are engaging and expertly ornamented. Hasnaa Bennani is particularly affecting in the first of Couperin's Lessons for the Wednesday... — BBC Music Magazine, Awards Issue 2015, 4 out of 5 stars More…

It seemed natural for Le Poème Harmonique, which has already recorded some of the greatest works in the 17th-century French sacred repertoire, to contribute to Alpha’s Versailles Collection by giving its vision of François Couperin’s Leçons de Ténèbres. To this it adds a work as masterful as it is forgotten: Louis-Nicolas Clérambault’s Miserere.

The Leçons de Ténèbres were written by François Couperin for the Holy Week liturgies of 1714, at the Abbey of Longchamp. They take up the Old Testament text from the Lamentations of Jeremiah, wherein the prophet deplores the destruction of Jerusalem by the Babylonians. In the Catholic tradition, they symbolize the solitude of Christ, abandoned by his apostles.

Isabelle Druet, Hasnaa Bennani, Claire Lefilliâtre and Vincent Dumestre give us an interpretation in which the affect is, of course, at the service of a rhetoric appropriate for the period and this repertoire whilst fully exploiting the lyric beauty of these works.

These performances, in a nicely-captured resonant acoustic, are engaging and expertly ornamented. Hasnaa Bennani is particularly affecting in the first of Couperin's Lessons for the Wednesday of Holy Week...some superb singing and a strong sense of ensemble.