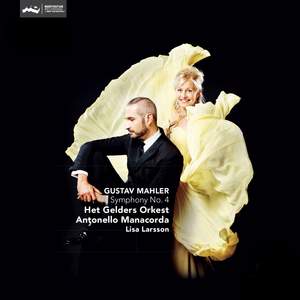 Manacorda is sunny and relaxed, an impression enhanced by exceptionally lush and velvety sound engineering which puts us at some distance from the performers even when listening through the regular... — Gramophone Magazine, June 2015 More…

This hybrid SACD recording of Gustav Mahler’s Symphony No. 4 comes from the internationally renowned Het Gelders Orchestra and its principal conductor Antonella Manacorda. The soloist in the last movement is the outstanding mezzo-soprano Lisa Larsson, who can also be heard on this disc performing three songs from Mahler’s song-cycle “Des Knaben Wunderhorn”.

Gustav Mahler’s Fourth Symphony was completed in 1901. At first Mahler had major plans for the piece. It was to be an extensive work of six movements alternating vocal and instrumental parts, somewhat like the Third Symphony. But gradually the scope of the concept was reduced with the work ending up as a four-movement piece for a considerably smaller orchestra than the composer’s previous three symphonies. Only the final movement contains a vocal element, with a soprano singing the praises of heavenly eternity as seen through the eyes of a child. The soloist on this recording is the highly- regarded soprano Lisa Larsson, who on this recording also performs three songs form Mahler’s early song-cycle “Des Knaben Wunderhorn”.

As a founder-member, vice-president, and concertmaster of the Mahler Chamber Orchestra, Antonello Manacorda’s has strong links with Gustav Mahler’s music. He was appointed Principal Conductor of the Kammerakademie in Potsdam in 2010, and took on the same role with the Het Gelders Orchestra in 2011. Manacorda has also been a regular guest conductor with many other orchestras, including the Frankfurt Radio Symphony, the BBC Philharmonic, and the Sydney Symphony Orchestra.

Equally at home on the concert platform and the opera house, Lisa Larsson is known for her diversity as an artist. She has made guest appearances at most of the major European opera houses including the Bavarian State Opera, the Royal Opera House in London, and the Teatro La Fenice in Venice, as well as at the Salzburg Festival, the Lucerne Festival, and the Glyndebourne Festival. She has released two recordings to date for Challenge Classics: the critically-acclaimed album ‘Ladies First’ (CC72622) which featured arias by Joseph Haydn, and ‘La Captive’ (CC72639), a disc devoted to the music of Hector Berlioz.

Manacorda is sunny and relaxed, an impression enhanced by exceptionally lush and velvety sound engineering which puts us at some distance from the performers even when listening through the regular two channels. Though some Mahlerian grit and sparkle is sacrificed in the process, audiophiles should be entranced

[Manacorda] directs a performance of uncommon musical sensitivity here, often attaining moments of lambent pathos in this most Arcadian of Mahler symphonies, and his reading is by any reckoning tremendously impressive. No less accomplished, either, is the playing of Het Gelders Orkest, which…responds with exemplary precision and commitment…the three songs from Des Knaben Wunderhorn are welcome fillers, and they're beautifully delivered.