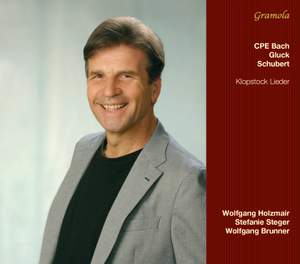 Many contemporaries considered Friedrich Gottlieb Klopstock’s poetry awkward, and for this reason only a few poems and odes have found their way into music. But these ones were frequently taken up (Die frühen Gräber, Sommernacht, Vaterlandslied, Der Jüngling) and linked the composers such as Christoph Willibald Gluck, Carl Phillip Emanuel Bach and Franz Schubert on a higher plane, as it were.

Wolfgang Holzmair, an internationally successful baritone, together with Wolfgang Brunner on the fortepiano and Stefanie Steger (soprano), compare and contrast the two or even three parallel settings of the same text (odes on friendship, nature and love), unearthing the truly astonishing.

Wolfgang Holzmair is one of the leading baritones of our time. Besides his comprehensive interest in song, he is also an indispensable component of international productions on the opera stage, which has earned him considerable recognition in cooperation with Graeme Jenkins, William Christie, Seiji Ozawa, Herbert Blomstedt, Rafael Frühbeck de Burgos or Nikolaus Harnoncourt. Numerous CD recordings for Philips, Tudor, nightingale, cpo and Capriccio underline his individual class as well as his chamber music skill. He has also been awarded a Pasticcio Prize and a Grammy (for Brahms’ A German Requiem).

Stefanie Steger began an M.A. course with Elisabeth Wilke and Wolfgang Holzmair (song and oratorio) at the Mozarteum in Salzburg, which she passed with distinction in 2013. She co-operated as a guest in the opera class and was already working as a soloist with great musicians and conductors of our time (René Jacobs, Roger Norrington – with the Zurich Chamber Orchestra, Andrea Marcon, Hiro Kurosaki, Dorothee Oberlinger, Florian Birsak).

Wolfgang Brunner studied school music, piano, historical keyboard instruments and musicology and currently teaches at the Mozarteum University in Salzburg, the Bruckner University in Linz and the Academy of Music in Trossingen. Following international competition successes on the harpsichord and the fortepiano, he has been a regular guest at major European festivals for Old Music and is today considered one of the leading specialists of his generation. In 1991, Wolfgang Brunner founded the ensemble ‘Salzburger Hofmusik’ which mainly, but not exclusively, performs music of the 17th to 19th centuries on period instruments. The music of the court in Salzburg is a focus in their repertoire. To date, he has released about 50 CDs as a soloist, including many first recordings from the early Baroque to Carl Orff.