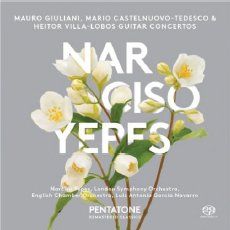 The seeds were planted in the early 1970s when Deutsche Grammophon realised what amazing results could be achieved by recording the multi-channel tapes, with either four or eight channels. Yet, due to a few restrictions,

they never fully blossomed. Flaws in the playback equipment meant that music connoisseurs were prevented from enjoying these recordings in the way that artists, producers, engineers and other professionals intended, even though recording technology was already way ahead of its time.

Now – over a quarter of a century later – thanks to the arrival of the multichannel Super Audio CD, there is finally a system available which permits these precious recordings to be released in the quality they already deserved back then.

This release is a delicious offering of Villa-Lobos’ clear and expressive works, unique pieces reflecting the transitional period between the Classic and the Romantic at Giuliani, bound together with the melodious and lush works of Castelnuovo-Tedesco. How mind blowing it is to be able to enjoy the compositions from one of the most underrated guitar maestros of all time next to the creations of one of the leading guitar virtuosi of the early 19th century, tied up together with the works of one of the most fascinating modern composers – all in one recording.

Now on SACD, you get to indulge in the Mauro Giuliani, Mario Castelnuovo-Tedesco, Heitor Villa-Lobos: Guitar concertos in the intended sound quality as when they were recorded.