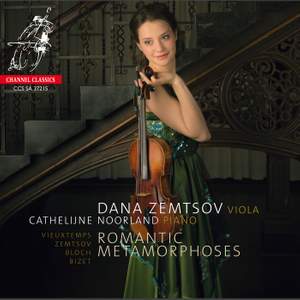 In some respects this is a very personal disc. It aims, we are told, to explore the 'many and often subtle definitions' of the word 'romantic' as expressed in music for viola and piano...Zemtsov's... — Gramophone Magazine, September 2015 More…

I. Lento - Allegro ('In the Jungle: Life in the Primitive World')

'The term ‘Romantic’ has always been something of a mystery to me due to its many and often subtle definitions. On this CD I invite the listener to re-explore this phenomenon, so often evident in day-to-day life, from different perspectives. The programme takes as its point of departure the nineteenth-century classical romanticism of the beautiful ‘Sonata’ by Henry Vieuxtemps. This is the lyrical, sensitive type of romanticism so typical of that period. In contrast to this is ‘Suite for viola and piano’, Ernest Bloch’s romantically fantasized adventure through savage nature and tribes under the sun in the jungle. Waxman’s ‘Carmen Fantasy’, which probably needs little introduction, is a strong depiction of Bizet’s dramatic opera. For me personally, however, the most ‘romantic’ and personal piece on this CD is the ‘Melodie im Alten Stil’ by Evgeni Zemtsov. The nostalgic style in which this modern piece is written, with its lyrical melody, ornamented in Baroque style, imposed on fresh, contrasting harmonies, is just one reason to admire it. A second one is the story behind it: during his studies in Moscow the composer fell in love with a beautiful girl. She played the viola, and he wrote this beautiful piece for her instrument as a declaration of love. One year later their first child - my father - was born.' Dana Zemtsov

In some respects this is a very personal disc. It aims, we are told, to explore the 'many and often subtle definitions' of the word 'romantic' as expressed in music for viola and piano...Zemtsov's understated virtuosity is admirably balanced by the detailed refinement of Cathelijne Noorland's pianism.