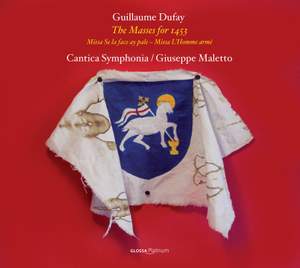 Guillaume Dufay: The Masses for 1453

Crammed onto one new disc from Cantica Symphonia on Glossa are two of Guillaume Dufay’s most important polyphonic works brought alongside each other for the first time on CD: the 'Missa Se la face ay pale' and the' Missa L’Homme armé'. The two masses were amongst the first in history to use popular songs for their cantus firmus: Dufay’s own chanson for the first mass and the anonymous popular tune, “The Armed Man”, for the second. The year 1453 was an extraordinary one in Western Christendom with the Fall of Constantinople following the acquisition by Louis, Duke of Savoy of what is now known as the Shroud of Turin. As renowned scholar Anne Walters Robertson describes in her incisive scene-setting analysis for the booklet, these two events provided the backdrop for Dufay, newly recalled by the Duke to the Court of Savoy, to compose these remarkable commemorative masses. As is the case with its general interpretative outlook, Cantica Symphonia opt for performances which embrace the use of instruments such as slide trumpets, sackbuts, fiddles and the organ alongside vocal forces. Director Giuseppe Maletto and organist Guido Magnano discuss their reasons for such instrumental involvement in the CD booklet. This is the fourth recording of music by Guillaume Dufay: two volumes devoted to motets and one to chansons, from Cantica Symphonia on the Glossa label, and it continues the Italian ensemble’s remarkable coverage of 15th-century treasures.

These readings, with alternating solo voices and full ensemble, combining voices and organ, fiddles, harp and sackbuts, are splendid, bringing out the full magnificence of Dufay's conception and evoking the splendour of lavish 15th-century courtly ceremony...The singing and playing are both beautifully detailed, with unfussy handling of the more rapid ornaments and a lovely sense of the broader sweep of the music.

Both Se le face ay pale and L’homme armé are embellishments around repetitions of secular tunes. These sweet textures are given with unhurried grace.

Unlike a number of recent more spartan voices-only discs of Dufay, Cantica Symphonia have recorded the masses with instruments; the use of sackbuts especially gives grandeur and warmth to the performances, and a real sense of occasion, too.