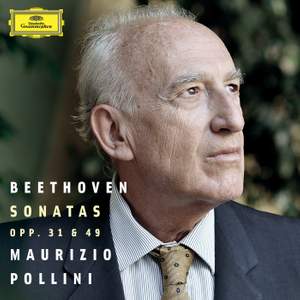 Pollini is not a pianist with a sense of humour, but his playing has a trim, classical cut with plenty of vitality, and a blunt, brusque Beethoven also bursts through from time to time. — Financial Times, 22nd November 2014, 4 out of 5 stars More…

Almost forty years have passed since Maurizio Pollini made his first studio recording of piano sonatas by Beethoven. His visionary interpretations of the composer’s Piano Sonata opp. 109 & 110 on the Deutsche

Grammophon label marked the beginning of an extraordinary artistic journey. The great Italian artist crowns his complete Beethoven cycle with the release on 17 November of the Piano Sonatas opp. 31 & 49, a title certain to take its place in the pantheon of essential piano recordings. The new album, recorded in the Herkulessaal Munich in 2013–14, will also be released as part of an eight­disc box comprising Pollini’s survey of Beethoven’s 32 piano sonatas.

Pollini’s complete cycle of the Beethoven sonatas, the first to appear on the Yellow Label since Daniel Barenboim’s in the 1980s, takes its rightful place in Deutsche Grammophon’s discography alongside Wilhelm Kempff’s legendary mono recordings from the 1950s and their stereo successors from the 1960s.

Pollini’s achievement also ranks with the incomplete Beethoven cycle made for Deutsche Grammophon by Emil Gilels, a legendary project curtailed by the Soviet pianist’s sudden death in 1985.

Time has played an important role in the development of Pollini’s Beethoven. “The interpretation of all the works I play develops with time,” he has observed. “Otherwise, there would be no renewal. So every time we see a piece of music, there is a little difference. Life makes that difference.”

from giving concerts for a year and a half to concentrate on refining his technique and broadening his repertoire. After that he gradually returned to the concert stage and in 1971 signed an exclusive contract to record for Deutsche Grammophon. Pollini’s pursuit of perfection, the intellectual clarity and heartfelt beauty of his interpretations, and quest to connect with the spiritual domain of music have contributed to the development of the complete artist.

Beethoven has been at the heart of Pollini’s musical life for more than five decades. His interpretations of the composer’s music have been informed by profound study. They have also gained from his close contact with the creative energy of such contemporary composers as Pierre Boulez and from his determination to reach far beneath the surface of serious music in search of deeper meaning. In the forty years since he began his piano sonata cycle, Pollini’s Beethoven interpretations have grown in maturity, power and clarity. The complete set of recordings bears witness to his extraordinary artistic evolution and the inexhaustible nature of Beethoven’s imagination.

Maurizio Pollini has given Beethoven sonata cycles in concert many times, including in Berlin, Munich, Paris, London and Vienna. Although several of these were recorded live for possible future release, the pianist opted to preserve most of his interpretations for Deutsche Grammophon under studio conditions. His complete cycle was recorded in the Herkulessaal in Munich and the Musikverein in Vienna, with the exception of one excursion to Lucerne’s Culture and Congress Centre.

Christopher Alder, producer of many of Pollini’s Beethoven albums for the Yellow Label, recalls how the pianist follows a meticulous and consistent pattern of preparation, recording and listening. “Like all great artists, his knowledge of the works is so immense. I believe he never really stops reflecting on the music he performs and understands precisely how each of the piano sonatas relates to the other works Beethoven was writing at the time. His routine of recording usually involves a preparatory day. The next day he begins by playing the complete programme once through. He repeats the process twice more and, after listening to various short passages the following day, will play through the programme three times again. Everything arises in the moment of performance, even though he knows exactly what he’s aiming to do and intuitively feels when he has strayed from that by the smallest margin.”

Pollini’s recordings of Beethoven’s last five piano sonatas, issued on three LPs, attracted critical praise and were chosen as “Instrumental Album of the Year” at the inaugural Gramophone Awards in 1977.

Gramophone’s reviewer wrote of the “noble purity” of Pollini’s interpretations, an observation inspired by the intellectual rigour and spiritual intensity of his music­making. The pianist’s account of the Late Piano Sonatas proved both a commercial and critical success. Today it remains among the best­selling titles in the Yellow Label’s Originals series. Pollini returned to the Beethoven piano sonatas for DG in 1988, recording opp. 31 no. 2, 53, 79 and 81a. The project continued to unfold in 1991 when he set down revelatory readings of the Piano Sonatas opp. 27 and 28, and gathered momentum again six years later with the live recording of opp. 22, 26 and 53.

Piano Sonatas opp. 54, 57, 78 and 90 were recorded in 2002, while opp. 10 and 13 were added to the pianist’s evolving cycle some months later in the same year. He turned to the early Piano Sonatas Op. 2 in 2006 and waited another six years before recording Piano Sonatas opp. 7, 14 and 22. Each work was recorded at the precise moment when Pollini felt ready to commit his interpretations to disc.

The completion of Pollini’s Beethoven cycle offers music­lovers the chance to explore the nature of his relationship with the piano sonatas. It also charts the long­term development of his understanding of some of the greatest keyboard works ever written, inexhaustible expressions of the human condition conceived over the course of their composer’s creative lifetime.

In 2011 Pollini told the Guardian (London) of the critical importance of the works at his repertoire’s heart, Beethoven’s piano sonatas among them. He explained that “it doesn’t matter if you play these pieces all the time, or go for years without playing them at all, which often happens to me. They are always there in your mind. You think about them and refer to them. You also entertain the hope, although it is sometimes an illusion, that you will understand them a little better over time. These are relationships that go on forever, and so long as you keep playing the piano they will never be concluded.”

Pollini is not a pianist with a sense of humour, but his playing has a trim, classical cut with plenty of vitality, and a blunt, brusque Beethoven also bursts through from time to time.

he combines a fearsomely formidable technique with unfailingly intelligent interpretations...now that Pollini has plugged the remaining gaps in his Beethoven sonata discography, for me personally there’s no contest, and I can’t recommend this set highly enough. Buy it!

While his playing has always been austere, and there is the sense in his treatment of the Opus 49 sonatas here of taking an intellectual sledgehammer to crack two unassuming musical nuts, Pollini’s treatment of the three Opus 31 works is less severe than it might have been a decade or so ago. There is still some fearsomely implacable playing, of course

Judging from his copious humming, Pollini enjoyed playing Sonata No 18 the most. He certainly fills it with playful energy, although for me he exerted the strongest grip in the tension-filled first movements of Nos 16 and 17, strewn with resonating pauses and impetuous cascades.