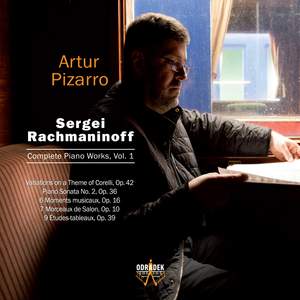 Pizarro produces a gorgeous tone from his chosen Yamaha CF6...and the 20 brief variations are as lovely as I've heard...he prefers to play down the bravura aspects of this most intimate of the... — Gramophone Magazine, January 2015 More…

Described as a “poet amongst pianists”, the renowned Portuguese artist Artur Pizarro makes his debut for Odradek Records with the first of three 2-CD sets presenting the complete solo piano works of Sergei Rachmaninoff.

A former winner of the Leeds Piano Competition - which brought him to international acclaim in1990 - Pizarro offers his listeners a lifetime of love for, and experience with, this music which speaks, as he says, “of the endless variety of the human condition”. Tracing Rachmaninoff's development as a composer from the early Nocturnes and his encounters with Tchaikovsky as a teenage student of Nikolai Zverev in the 1880s, to the so-called ‘Corelli Variations’ of the 1930s, this landmark release shines a new light on every aspect of this remarkable oeuvre.

“The sheer inventiveness and beauty of the music is really amazing,” Artur Pizarro told Pianist magazine. “The rhythmic and harmonic language is so rich, and very few composers wrote so well for the piano.” On this first volume, from the monumental passion of the Piano Sonata No 2, via the Études-tableaux, Op.39, to the tender lyricism of many of the lesser-known miniatures, Pizarro imbues every page of this music with the fire and feeling for melodic contour for which his playing has become so admired.

Pizarro produces a gorgeous tone from his chosen Yamaha CF6...and the 20 brief variations are as lovely as I've heard...he prefers to play down the bravura aspects of this most intimate of the composer's late works. There is no lack of bravura in Pizarro's resonant, lucidly articulated account of the Sonata.

The playing is powerful, but always sonorous and thoughtful.

the enthusiasm of the playing more than compensates for the occasional moments when it all gets a bit too strident.