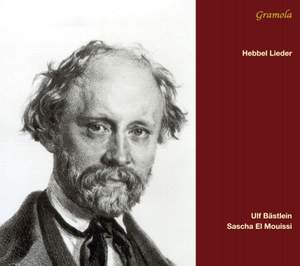 The internationally much sought-after bass-baritone Ulf Bästlein continues his successful series of recordings dedicated to individual poets and in his new CD devotes himself to the most varied settings of texts by Friedrich Hebbel.

In conjunction with the pianist Sascha El Mouissi, he has selected songs by composers such as Robert Schumann, Peter Cornelius, Franz Liszt or Johannes Brahms, all of whom Hebbel met in his place of residence in Vienna, as well as works from later years, by Hugo Wolf, Hans Pfitzner, Walter Courvoisier, Emil Matthiesen, Felix Draeseke, Max Schilings, Walter Braunfels and Othmar Schoeck up to Alban Berg.

Besides poems and ballads, passages from dramatic works by Hebbel found their way into the world of music, e.g. one of the first recordings containing the vocal scene Hagens Traum from the Nibelungen by Volker David Kirchner.

Ulf Bästlein, born in Flensburg, Northern Germany, first studied classical philology, German literature (with promotion) before studying voice with Prof A Meyerolbersleben at the Academy of Music in Freiburg. In 1987 his operatic career led him first to the Heidelberg City Theatre and later on to Augsburg, Hannover, Lübeck, and the Hamburg State Opera.

Equally important have been his activities in concert and lied, which are documented in numerous radio (SWF, NDR, BR, RB, ORF) and television (ARD and ZDF) recordings. He was awarded several prizes, including the VDMK singing competition in Berlin and the Nürnberger Meistersinger competition. He has sung in almost every European country and frequently appears as a guest at international music festivals. His wide repertoire ranges from Monteverdi, Bach, Händel and Mozart up to contemporary compositions. Numerous recordings testify to his versatility as a performer. In 1999 he was appointed to the post of Professor at the Musikhochschule in Lübeck and in 2000 he was also appointed Professor of Singing at the University of Music and Performing Arts in Graz, Austria. Ulf Bästlein regularly leads masterclasses both in Germany and abroad.

Alongside many other prizes, Sascha El Mouissi was awarded the Johannes Gutenberg Prize from the University of Mainz, the 'Lied-Prize' from the Ministry of Culture of the State of Schleswig-Holstein, and the Theodor Storm Prize in Piano. Sascha El Mouissi has just completed a busy international concert schedule and has been invited to numerous festivals, such as the Festwochen in Vienna, both in Germany and abroad. His concert tours have taken him to England, France, Italy, Austria, Switzerland and Marocco. In addition to his solo piano performances, he can be seen as a chamber musician and, most often, as the piano accompanist for renowned vocalists.