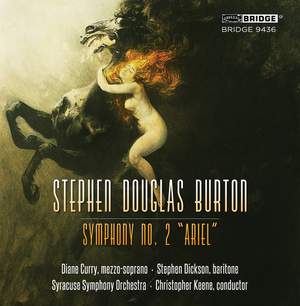 I. Ariel (The Night Dances)

This CD release restores the music of Stephen Douglas Burton to the recorded archive. Burton was a major figure in the 1970s and 80s (his symphonic works were commissioned and played by the Berlin Philharmonic, the Chicago Symphony, and the Israel Philharmonic and championed by such conductors as Sir Georg Solti, Antal Dorati and Hans Werner Henze, and his opera, The Duchess of Malfi, was called “America’s finest opera” on the National Public Radio broadcast of the Wolftrap premiere.

Burton was born in Whittier, California in 1943. His Symphony no.2 'Ariel' sets poetry of Sylvia Plath and features Diane Curry (mezzo-soprano) and, in his only commercially available recording, the great baritone Stephen Dickson.

Burton’s symphony, completed in 1975, is an ambitious and dazzlingly colourful work in 5 movements. The recording is a newly mastered performance of the long out of print 1978 LP.