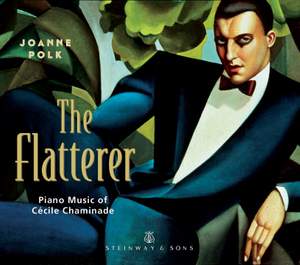 A welcome outing for Chaminade's piano works, 'salon' pieces and much more, full of glitter and charm, with stylistic echoes of Bizet, Gounod and Franck. Polk makes a convincing case for their... — BBC Music Magazine, February 2015, 3 out of 5 stars More…

Coming of age in Paris in the second half of the19th century, Cécile Chaminade’s major models were Berlioz, Meyerbeer, Gounod, Bizet and Franck - all renowned composers of serious Romantic music.

When she reached her own compositional maturity in the 1880s, she made her first mark writing in genres associated with these recognized masters. Yet her true voice emerged later, writing smaller character pieces for piano. Her so-called 'salon' pieces are the same kind of short works that Brahms and Chopin made popular - many are true virtuoso works, equal in technical difficulty to any of the concert etudes of Chopin or Liszt.

Based on this small collection of Chaminade’s music, we can only wonder why she has had to wait so long to be admitted to the pantheon of great French Romantic composers.

Joanne Polk, noted pianist and champion of music by female composers, makes her debut on the Steinway label with this irresistible collection of Cécile Chaminade’s piano works.

A welcome outing for Chaminade's piano works, 'salon' pieces and much more, full of glitter and charm, with stylistic echoes of Bizet, Gounod and Franck. Polk makes a convincing case for their rehabilitation.