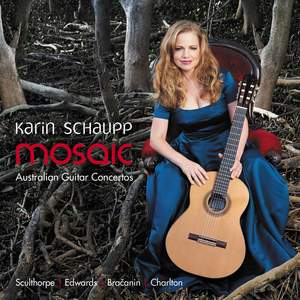 These fine performances, in which [Schaupp] is ably accompanied by a variety of Australian orchestras and conductors, like the composers themselves demonstrate an ability not just to describe... — Gramophone Magazine, October 2014 More…

The four works on this CD span a period of composition of just 6 years (1989 – 1995) and for Ross Edwards, Philip Bračanin and Peter Sculthorpe, represents their major work for the instrument. Sculthorpe’s Nourlangie (previously released on ABC4767627) has gone on to become on of his most performed works and brings vividly to life the expansiveness of the Australian continent. The Bračanin concerto was commissioned by Karin, while still a teenager, and has subsequently become one of the frequently played guitar concertos on Australian radio. Ross Edwards concerto draws on the rich flora and fauna of Arnhem Land and the magnificent Arafura Sea beyond. In this premiere recording by Karin Schaupp (first released in 2005 on ABC4762270) Karin revels in the ‘Edwards’ sound world’. The most recent work on this recording is from Richard Charlton, himself a guitarist, who wrote Mosaic for Adrian Walter for the final concert of the 1995 Darwin International Guitar Festival. Mosaic, is a musical expression of Charlton’s memories and impressions of the Northern Territory, from the brilliant colours of earth and sky to the exhilarating power of a tropical storm.

These fine performances, in which [Schaupp] is ably accompanied by a variety of Australian orchestras and conductors, like the composers themselves demonstrate an ability not just to describe a landscape in music but to tell its story.