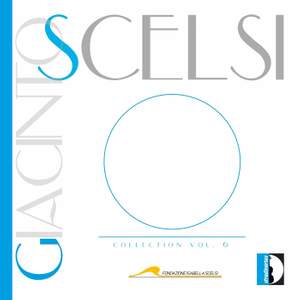 exceptionally welcome...the CD as a whole is essential listening...I look forward to the continuation of the series. — International Record Review, March 2015

Roberto Fabbriciani's collaboration with Giacinto Scelsi dates from the 1960s, when Roberto met him in Rome in the context of the festival Nuova Consonanza. From that time, Roberto was fascinated by the language and poetics of Scelsi, and interpreted all his flute works at different international festivals including a performance of all Scelsi's flute works at the Almeida Festival in London.

For a long time Roberto had known of the existence, also confirmed by his teacher Severino Gazzelloni, of 'Tetratkys', a substantial piece by Giacinto Scelsi for solo flute. 'Tetratkys' has recently come to light thanks to Nicola Sani and Roberto was delighted to give it the world première in Berlin at the Festival Ultraschall (2009). He later recorded it for this CD.

Roberto Fabbriciani's professional path began in 1964, when he entered the orchestra of the Maggio Musicale Fiorentino. Since then, he has tackled both the classical repertory and the most extreme avant garde with the greatest rigour and great passion. His watchword is “to feel emotions and to create emotions”, running risks in interpretation, always directed towards provocation and synergetic collaboration with composers and artists of various schools and aesthetics.

exceptionally welcome...the CD as a whole is essential listening...I look forward to the continuation of the series.