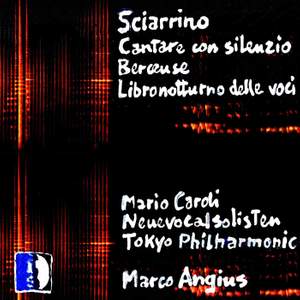 "The three works by Salvatore Sciarrino on this CD are from live performances in Rome (2007) and Tokyo (2012). By chance, their date of composition creates a kind of numerical rhyme (1969, 1999, 2009). The invention of spectres within provocative formal concretions, of declaredly ancient form, is certainly a peculiarity of Sciarrino’s early production; in any case, he has always indentified and his sounds and produced them from the beginning, imagining instrumental solutions which allowed him to take music beyond its zero level and overcoming the historic ˆbut now well wornˆ frontiers of contemporary music with innate mimetic ability, that ability which urges his works to open to the surrounding world, to the reality or unreality of our perceptions.” Marco Angius

Caroli’s ethereal solo lines underpin the six voices of the Neue Vocalsolisten in settings of poems by Michel Serres and Edgard Gunzig and Isabelle Stengers: percussion and live electronics add further layers of embroidery to create a fragile, elusive work in which shards of text and music seem to orbit each other in ever-changing configurations.